About 101,000 students lived in unstable, or temporary, housing in the 2020-2021 school year, according to an analysis of state data released Monday by Advocates for Children. That’s a larger number of children than the entire school district of Denver.

Homeless students face a host of barriers to education in any given year, especially in terms of attendance. In a year when the COVID pandemic continued to disrupt in-person schooling and place extraordinary challenges on families and students across the five boroughs, homeless students faced even more hardships.

Accessing classwork and instruction — which was difficult for many children last school year — was sometimes impossible for homeless students and their families. Family shelters did not have Wi-Fi and are only getting it now, following a lawsuit from Legal Aid. Even students equipped with city-issued internet-enabled iPads struggled to log on for classes because shelters had spotty connections to the cell service that those devices depend on.

Now, advocates are looking ahead to Mayor-elect Eric Adams in hopes that he’ll take aggressive steps to curb student homelessness and address their dire educational outcomes. Just 29% of homeless students passed their grades 3-8 reading exams, while just 27% passed math — both about 20 percentage points lower than their peers living in stable housing, according to 2019 data. Sixty-one percent of homeless students graduated on time in the school year before the pandemic, compared to 84% of their peers with stable housing.

“We are hopeful that given the incredibly poor outcomes we’re seeing, particularly for students in shelter, that Mayor-elect Adams’ administration will recognize the crisis for what it is,” said Jennifer Pringle, director of Project Learning In Temporary Housing at Advocates for Children.

More than 3,800 students had no shelter and lived in cars, parks or abandoned buildings, while another 200 students lived in hotels or motels, according to the Advocates for Children report. Another 28,000 lived in city shelters, while about 65,000 students lived “doubled-up” with friends or family. (Information was not available for roughly 3,900 students, the organization said.)

Though the rate was similar to prior years, the overall number of homeless students — 94% of them Black or Hispanic — appeared to have fallen by 9.5% year-over-year. That decrease could be due in part to a drop in student enrollment across the system, which lost more than 3% of its students last school year. Additionally, schools may have faced more challenges in identifying where students lived because the majority of children chose to learn remotely — an issue that advocates also flagged last year.

Homeless students were far less likely to show up for remote or in-person school last year. Between January and June 2021, attendance rates for students living in shelters were roughly 10 to 14 percentage points less than students in stable housing, according to city data analyzed by Advocates for Children.

The struggles have continued this year. The first couple weeks of this school year, the attendance rate was about 73% for those in temporary housing, rising to 78% more recently, compared to the citywide rate hovering around the “high 80s and low 90s,” according to what education department officials have shared with Advocates for Children.

For one mom last year, attendance wasn’t the issue. She struggled to simply enroll her son in preschool while moving between shelters and trying to find permanent housing.

Comfort Mensah, a 33-year-old mother in the Bronx, needed a program for her then-3-year-old son Gabriel that would provide support for his recent diagnosis of autism and developmental delays.

Mensah regularly called the education department to find a placement for Gabriel while also caring for her 2-year-old son. At the same time, she also was navigating her housing search on her phone since there were no computers at the shelter to use, and without the internet, she often went over the data limit on her mobile plan. Sometimes, she spent chunks of the roughly $400 she received from public assistance to buy him toys from Amazon that were meant to improve his motor skills.

“At this point, I was in tears every day because my son is not telling me what he needs, he’s always crying,” Mensah said. “I didn’t know what to do.”

About 30% of students in shelters have been identified to need special education services, compared to 21% of permanently housed students, according to data obtained by Advocates For Children.

Calls for more support in shelters

The de Blasio administration has made some investments in support for homeless students, including $12 million for more school-based staff and training and 100 “Bridging The Gap” social workers for schools with high numbers of homeless children. The education department did not immediately provide comment.

Advocates For Children, along with about 40 other community organizations who work directly with families and students, are calling on the Adams administration to go much further.

They have asked Adams to tackle a slew of issues, including hiring 150 shelter-based coordinators who would help families like Mensah’s to navigate the education department and help with school enrollment, bus service, and special education services.

The organizations are also calling for several more changes, including improving school attendance, creating more coordination between housing agencies and the education department and moving more families in shelter closer to their home schools, as roughly 40% of families are in shelters outside of the borough of their child’s school.

After more than half a year waiting for the city to find her son an appropriate placement, Mensah eventually connected with Advocates For Children, which began helping her in February. By April, after Advocates contacted the education department, Gabriel was enrolled at Kennedy Children’s Center, a special education preschool in the Bronx, where he’s been since. The school serves children ages 3-5 who have been identified as having significant developmental delays.

Mensah has now found permanent housing at an apartment building in the Bronx that she said she loves. At school pickup last Friday, a teacher told Mensah that Gabriel has improved so much that they want to reevaluate certain parts of his individualized education program. 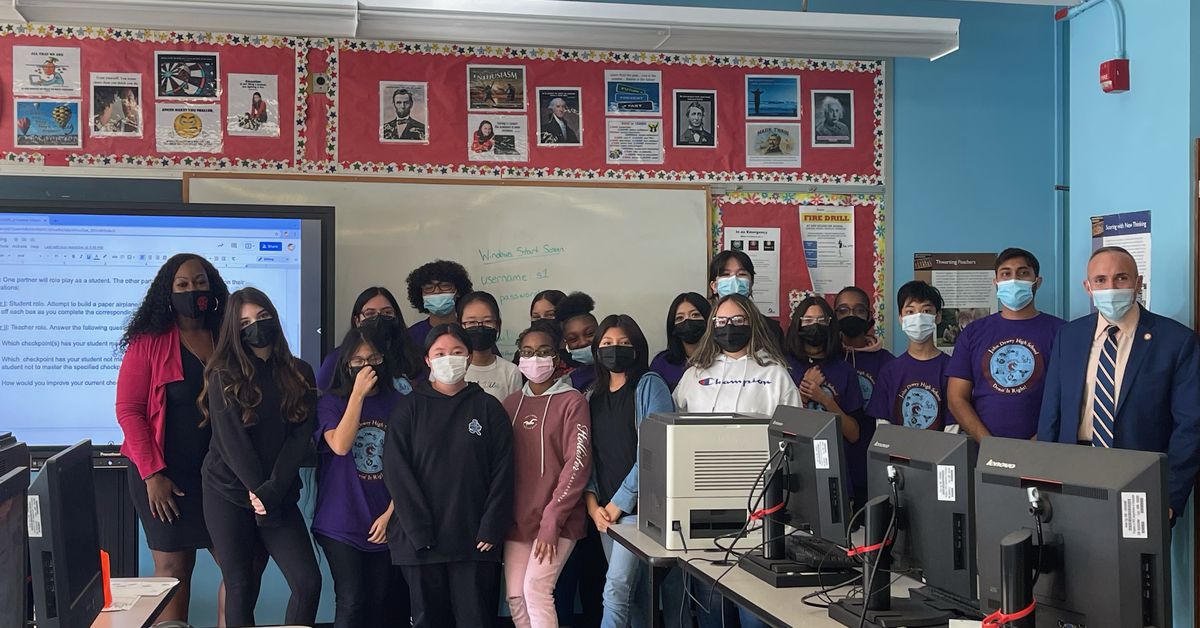 The Graduate! Network: From Stop Out to A Degree